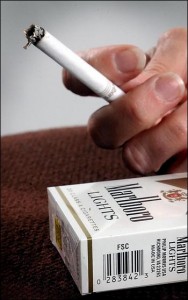 Fire safety cigarettes are coming and may already be on your store shelves. It’s just one more way for the government to step in to interfere in our lives in a futile attempt to protect a small percentage of lazy, stupid people from burning themselves alive. By the way, the new FSC cigarettes suck, literally!

What started in New York in 2004 and has now spread to at least 21 other states through advocates who have bypassed getting fire safe cigarette legislation passed through Congress, instead going directly to the states using the Coalition for Fire Safe Cigarettes. Now we can all drink heavily and pass out in bed with a lit cigarette and feel safe.

As one man interviewed said “People that smoke in bed should have been cleansed from the gene pool anyway, now we’ll have to put up with them”.   According to the CDC smoking will kill you too, but in today’s bright & cheery economy, I think many people smoke knowing full well if could kill them, yet continue knowing it could keep them from having to work until they’re 90.

So what sucks about FSC cigarettes?

YOU! You literally have to suck you ass off to get   a decent drag from the cigarette. Nobody told me about the FSC changeover, but already I was noticing something odd about my cigarettes. They tasted a bit different, probably due to the extra strips of (chemically treated?) paper added to extinguish the fire. So, unless you just hotbox a smoke, any time you take a break to talk or perhaps breathe, the cig immediately starts to go out, so when you take another drag, you have to huff & puff to get it started again. By the time I finished several smokes, my cheeks were getting sore from all the sucking. It’s enough to make you quit smoking altogether….which is perhaps their REAL goal.

I can think of better things for the state governments to interfere in;   how about cell phone usage in cars? I’m sure that kills many more people than dying in a house fire because of a lit cigarette. How about FSC candles and gas stoves that go out before your Spaghetti-O’s are warm?

What can you do about this sneaky new law? Click here to sign a petition to get it repealed, (TOO LATE) but be sure to leave a comment on your feelings about fire safety cigarettes.

Like ’em or hate ’em – nowadays you wonder if it’s not better to keep   smoking to hasten a quick & happy death rather than to endure a long, expensive, confining, bewildered, wet stay in a nursing home.