Bar of the Month 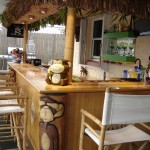 “I made a deal with my wife, if I got rid of the hot tub I had to build a bar. I went on line and found barplan.com and became a member. I downloaded the EHBP-04 L shaped wet bar and modified the design to the vision I had in my head.

So the construction began on Thanksgiving 2009 in one of the coldest winters on record for Florida and 3 months later it was complete. My brother and his family came to visit in April and the bar was christened for the first time.

Since the completion there has been 3 major parties at the bar and a house full of friends that stayed the night. People give up the keys to their cars when they step up to the bar for their first drink. All our friends know if the side gate is open that means the bar is also open for visitors.

Fully Equipped and Bug Free too:

The bar has water, refrigerator and booze on tap. I had to also extend the porch out about 20″ so you could walk past the the bar flies sitting at the bar. When I had the screen open to the bar, I thought this would be nice to open the porch up for large parties, but we live in Florida and mosquitoes are out 10 months out of the year.

So I sat down and had a few drinks to think about my new idea. Well four seven and sevens later and a plan, I made 3 removable screen panels and now have an open bar for large parties.”

More photos of the Monkey Bar…

The Monkey Bar Bartender Side

Awesome job Scott! One day I’d love to walk through that side gate!