Bar of the Month | 2 comments 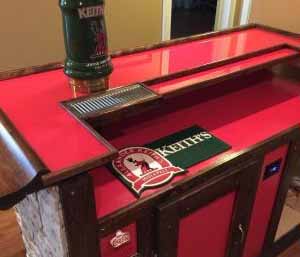 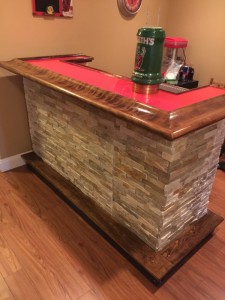 Every now and then a project built by one of our site members really catches my eye. This Coca Cola themed kegger bar was built by a site member and is a perfect example of using the plans to their fullest. The general idea was to match the Coca Cola themed bar room and memorabilia.

The bar started out using the EHBP-03 plan set was shortened from the standard 8 feet and covered in faux stone panels. The arm rail looks to be poplar and it has a cool tiger pattern to it. Poplar arm rail is not nearly as expensive as oak or other hardwoods and it’s a beautiful alternative to other expensive species arm rail molding.

The builder used the site resources quite a bit during the construction including tips from the forum and gallery. I recall answering a few questions and he contributed some great ideas too. Simple details like the black painted base framing makes the bar really stand out and creates a clean line in relation to the  flooring. Using standard dimensional pine lumber saves a lots of money and once covered with a coat of maple stain, you’d think it’s hardwood.

This is one of my favorite recent projects and this month’s Bar of the Month!
Great Job Gene!

BTW – If you (Gene) have any additions of corrections, please drop me a line and I’ll post them.
More photos of the Coca Cola Bar – complete with LED bar lighting.